La Liga is coming to its season finale. Real Madrid, Barcelona and Atlético will be the teams disputing the trophy. None of them lost the league yet, but clearly there is one team a little ahead from the others. Atletico de Madrid is the big favorite. This year La Liga is going to be a surprise until the very end, including a last match between two of the main competitors, Barcelona and Atletico.

Luckily, there are two of the finish games to be play in Madrid stadium. Atletico vs. Malaga on Sunday, May 11th play on Vicente Calderon Stadium and Real Madrid vs. Espanyol play on Santiago Bernabeu Stadium. So, if you are visiting the city this is a great opportunity to get tickets for this soccer matches in Madrid.

There are only five match left to play. The first one will be on May 6th between Valladolid and Real Madrid. Valladolid is fighting for survival, due is lack of triumph it could be a tricky contender for Real Madrid.

Next game journey will be on Sunday, May 11th. Games will be Celta vs. Real Madrid and Atletico de Madrid vs. Málaga. Both contenders are playing for their lifes. If Atletico de Madrid win this match against Malaga, will be scoring 3 more point that would be enough to put them out of Madrid’s reach.

The last two games of the season will be on May 17th Real Madrid vs. Espanyol and on May 18th Barcelona vs. Atletico. Barcelona’s fate in on its rivals hands, mainly on Espanyol. Could Espanyol win to Real Madrid and help his eternal rival Barcelona F.C. win La Liga?

In contrast, Atletico’s fate is on their own. They only need four points out of six disputed on two matches. It means their only have to win one match and get even on the other. Atletico has proved this season they are capable enough to achieve this goal.

Anyone could win, let’s enjoy this incredible La Liga finale!

Atletico de Madrid is the champion of the B2014 BBVA Spanish Liga.

Eventhough, the Champions Legue final match will be play by to Spanish teams, it will take place, as always, in a neutral city. This year Europe Champions finale will be play in Lisbon, Portugal. Real Madrid and Atletico are both in the run for two awards this season. Atletico can make a record, their first time winning both championships. In contrast, Real Madrid has been working harder on winning their 10th Europe Champions League, a magical number that is taking too long to achieve. 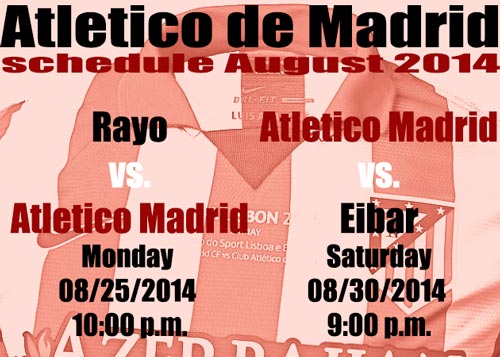