Skip to content (Press Enter)
Home>Attractions in Madrid>The Building of The Prado Museum: One of The Madrid Attractions

The Prado Museum is one of the most visited museums in the world not only because of its amazing collection of paintings, but also because of the beauty of the building, which is one of the Madrid attractions itself. In this article you will learn some of the most interesting facts related to this building.

First of all, the Prado Museum is located in a privileged zone. At the beginning of the Paseo del Prado, not very far from the central Atocha railway station and right in front of the Royal Botanical Garden, one of the greatest green areas in the capital of Spain. Besides, it either is very far from other interesting monuments of Madrid, such as the Congreso de los Diputados (Parliament), the Neptune fountain and the Buen Retiro Park.

This building was carefully designed because it was going to be a Natural History Cabinet, which would be part of a broader project ordered by the king Charles III in the late 18th century, also carried out by the next king Charles IV. However, during the reign of the king Ferdinand VII, they decided to change the use of the building: it would serve as a national gallery to show the huge collection of paintings the kings have gathered since the Habsburg dynasty.

As you may realize, the Prado Museum keeps some of the features that are also present in other Madrid attractions. One of these features is the combination of red and grey colours, which the bricks and the granite give to the complex. This feature links the building to the local tradition, which comes from the Middle Ages. However, the architect that projected the museum, Juan de Villanueva, gave the complex a Neoclassical style, loved by kings of that period.

The entrances to the museum pay tribute to some of the greatest painters of Spain history, also present on the walls of the Prado. The main entrance is called Velazquez Gate and it is the biggest and most monumental of the complex. It faces the Paseo del Prado and it is surrounded by many columns. Nevertheless, it is usually closed to the general public.

The Murillo Gate is located at the south and it is also interesting, as it faces the Botanic Garden and a quiet pedestrian square. The Goya Gate is located at the north and it is where the institution sells the tickets, as well as being a way out for visitors. And finally, the Jeronimos Gate is the most recent and faces the church with the same name. It links directly with the main hall.

It is also worth mentioning the enlargement the museum experienced some years ago. Through an underground gallery, the old building is connected with the new one, a modern cube designed by the Spanish architect Rafael Moneo. This cube is also made of bricks, in a clear reference to the Spanish tradition and keeping the same look than the old part, but with renovated and avant-garde lines. This building is squared because it hosts a Renaissance cloister inside, which used to belong to the Jeronimos church. Some of the columns can be seen today.

Therefore, before getting into the museum, take your time in admiring the building because it is one of the best Madrid attractions. And remember: you can buy a ticket to a guided tour with us. Enjoy your time in the Prado Museum! 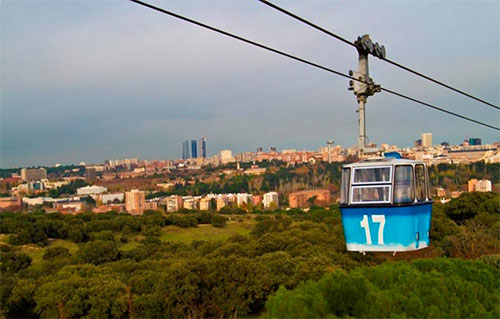