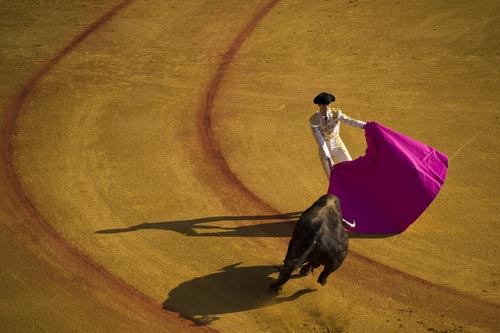 Bullfighting is rooted tradition in Spain. It was practice in Europe by the Greeks and the Romans, becoming a traditional practice in the Mediterranean world. It was exported to Latin America with the Spaniard pilgrims and become a very important show in México, Colombia, Equator, and Venezuela. If you are visiting Madrid, buy bullfighting tickets and be part of the Spanish ancient culture. If you have doubts on how to buy bullfighting ticket, check this tutorial.

What is a matador?

Matador, torero or bullfighter are the same. The three names refer to a man who performs bullfighting. They are consider heroes and really popular people, just like Hollywood stars or celebrities.

The term matador only refers to the main bullfighter, but there are some other subalterns in the ring during a show. Picadores and Rejoneadores accompany the matador and help him on the fight. Picadors mean “the one who poke” and it refers to the la lance carry during the show. In the other hand, Rejoneadores is the name given to a bullfighter who fights the bull on horseback. They also carry a lance and sometimes Rejoneadores perform a show before the bullfighter.

It real name was Manuel Laureano Rodríguez Sánchez. He born in 1917 in Cordoba, a city in Andalusia region in Spain. He started his career very young, as many other bullfighter. His father was a famous bullfighter named just like him, Manolete. He inherited his name and his fame. He came from a matador family, all the men in his family were bullfighters.

He did his first professional bullfighting at the age of seventeen. He became really famous and a sex symbol of its time. He form a group called “Los Califas del Toreo” –meaning the caliphs—that became the most popular bullfighters from Cordoba. This particual moniker was given to Rafael Molina “Lagartijo”, Rafael Guerra “Guerrita”, Rafael González “Machaquito”, and Manuel Rodríguez “Manolete”.

He died of severe injuries causes by a bull called Islero in the Linares Bullring in 1947.

José Tomás Román Martín is an inactive bullfighter that became very popular in 1995. He born in Madrid in 1975. He states his career in Mexico, since he couldn’t found anybody to support him in Spain. He starts its professional life in 1995. In 2010 he suffered a big injury cause by a bull and lost mobility in one of his leg being force to abandon bullfighting.

Famous Matador kill in the ring

There are several matador that get into the hall of fame after their death in the bullring. Bull kill matadors frequently, but science and medicine progress has helped lower the race of death in the ring. Manolete was one of the most famous cases, also El Espartero and Gitanillo de Triana. This heroes were honored after their death dedicating monuments or streets to its names.