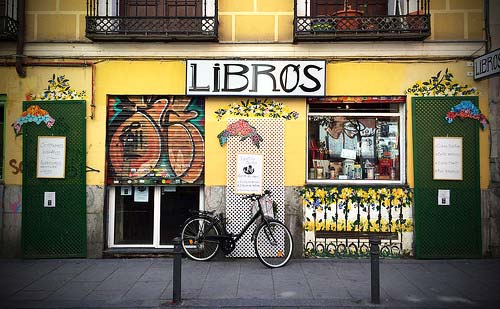 Malasaña is the trendiest district in Madrid. The area covered by this district is bounded by the streets Fuencarral, Gran Vía, Princesa, Alberto Aguilera and Carranza. Malasaña is to the west of Chueca –famous Madrid gay district– and to the east of Argüelle borough. There are several metro stations covering the area, but Noviciados station is the one located in the core of the district. It reminds a bit to the East Village in New York City or Candem Town in London, with the peculiarity that Malasaña still being a working-class neighborhood.

There are many thing to do in Malasaña district, since it is the actual center of the creative and countercultural scene in Madrid.

What to do in the Malasaña district

The most popular Malasaña attraction is Conde Duque cultural center. This old military barracks now turn into an alternative art gallery, auditorium and theater, was built in 1717 by architect Pedro de Ribera. If you are more into regular museum, you can visit National Museum of Romanticism and the Royal Tapestry Factory both in the neighborhood.

Besides recreating with extraordinary precision the Spanish Romantic Era (from 1814 to 1868), the National Museum of Romanticism holds a beautiful tea room. Completely set in Madrid Romanticism, this tea room is the best place to take a proper tea and a delicious piece of cake.

Visiting the Royal Tapestry Factory is an interesting experience. It was founded in 1721 by King Philip V, following the French model. If you are interested in the Spanish monarchy, you definitely have to visit the Palacio de Liria the actual residence of the Duke of Alba. Certain areas of the palace are open to the public and can be visit with precious booking. The House of Alba holds one of the biggest are collections of the world, and part of it is shown in the palace. (Fridays at 10.00 a.m., 11.00 a.m. and noon. Each turn will consist of a maximum of 15 people. Previous booking mandatory.) 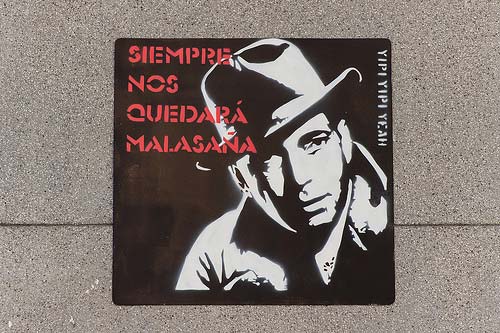 The 2 de Mayo Square commemorates the events of the May 2nd Uprising in 1808, which led to the War of Independence from Spain. This is a nice garden area with a central sculpture and a bow. On one side of the square is the famous Iglesia de las Maravillas in castillian style from the 17th century.

Triball is the acronym of “Triangulo de Ballesta”, a name for a borough following the style used for some districts in New York City. This former suburb of Madrid was full of orchards until the sixteenth century, but in the beginning of the seventeenth century they were substituted by several convents and monasteries built by royal command in here, as San Antonio de los Alemanes monastery and the Las Mercedarias de D. Juan de Alarcón convent. In the nineteenth century the area was urbanized gradually by the modern bourgeoisie, becoming a trendy neighborhoods in Madrid. Excluding of the two major urban reforms in 1861 and in 1910, Triball remains frozen in time with the most traditional Castilian typology.

Fuencarral Market opened its door in 1998 to meet the needs of the growing working-class population of Malasaña borough. In the summer of 2015 will close given the major changes that has taken in the neighborhood, but until this happens the market will organize parties and concerts to say bye properly.

Its avant-garde cafes and restaurants, it’s what makes Malasaña the trendiest district in Madrid. There are at least thirty restaurants you should try in the area. If you are looking for a restaurant with a lunch menu, the experts recommend Casa Candi (Noviciado, 16), A dos velas (San Vicente Ferrer, 16) and Como me lo Como (Andrés Borrego, 16). Three stand out for its friendly service and outstanding food.

Eating is not always a matter of hunger, sometimes is a romantic issue. If you are looking for place to fall in love, check La T (Molino de Viento, 4), In Situ (Valverde, 40) and Nänai (del Barco, 26). All three are considered Mediterranean author food and great places to have a fancy dinner.

If you fell wild and want to try something different, give it a try to the Banzai Sushi (Espíritu Santo, 16), Las Noches de Moscú (Marquéz de Santa Ana, 37) and Al-Jaima (Barbieri, 1). All considered the best non-Spanish food restaurant in Malasaña.

El Tigre (Calle de las Infantas, 30) is considered one of the best tapas bars in town. It is an institution of Madrid nights. This is a traditional tapas bar, with a little decoration but with excellent tapas and good cheap beer.

Malasaña neighborhood has been a major social and cultural movements. In 1979 Marcos López Artiga, had the idea of moving the aesthetics of music bars from New York to Madrid. Under this great idea La Vía Láctea (Velarde, 18) open its door. This hybrid of bar and concert hall was the epicenter of the famous counterculture movement emerged during the early years of post-Franco Spain Transition, known as the “Movida Madrileña.”.

Things to Do in Madrid at Christmas